The Rise of the Unifying Symbol in Twenty-first  Century Art 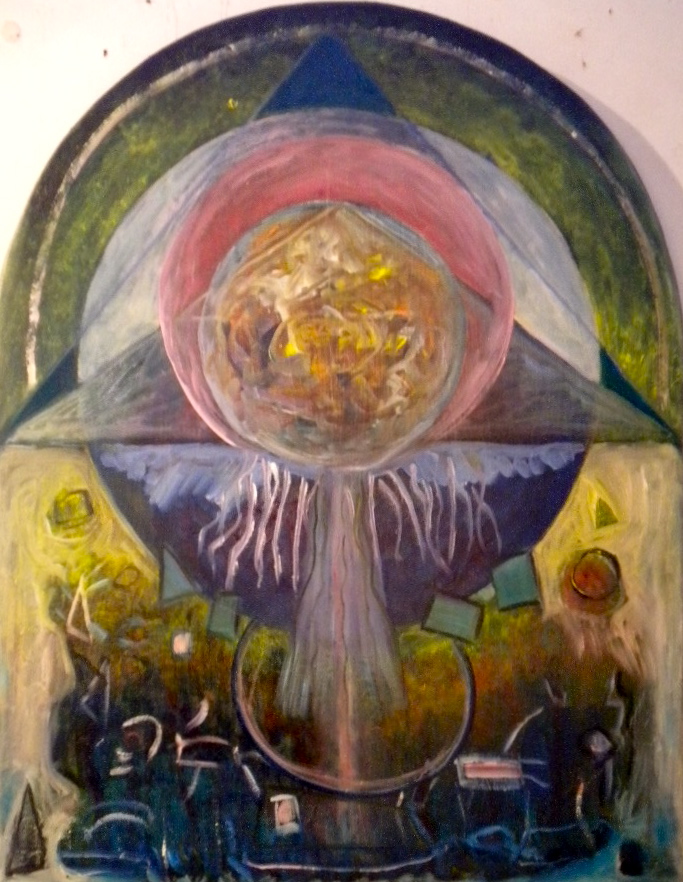 In Hindu culture, the symbol of the intertwined ida and pingula represents the flow of the kundalini, or serpent power, up the spinal chord from the base of the spine to the crown of the head.  This integration represents right/left brain, male/female and conscious/unconscious.  This unity in the body sought by yoga is a solution to the external polarization of the opposites that we experience, for example, in politics.  Television has exacerbated this societal split.  In cutting back news reporters, programs resort to talking heads which are booked in accordance to their political affiliation: left or right.  So, where the medium is the message, the message has become polarized.

Given this circumstance, artists have a responsibility to with unifying symbols in the unconscious in the alchemical tradition.  In creating works that contain the opposites, artists themselves work on integrating the polarities in their personality.  The integration of inner and outer realms is where the sacred marriage manifests through a unification of opposites.  This archetype is what C.G. Jung referred to as the Self.
The art containing the archetype is the art that best serves the global community.  Yet, how do we recognize it?  But before we can even answer this question, we need to know more about the origins and why it is surfacing into the collective right now. 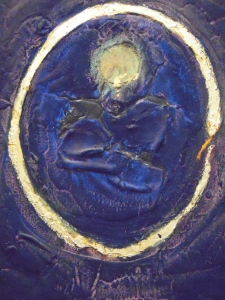 The moral relativism of postmodernism meant there are no gods to hold us accountable.  Therefore, self-interest takes precedence over morality and moral relativity prevails.  Likewise, there is no objective truth.

Yet, Sept. 11 returned the problem of evil to the forefront, thereby bringing on the swift demise of postmodernism, which denied absolutes in favor of a de-centered world where morality is ambiguous.  But to look into the problem of morality entering physics, we turn to the Heisenberg Principle and how it has been consciously incorporated into art at the close of the twentieth century, leading to a new epoch where acknowledgement of uncertainly is given a place in the work of art, thereby providing both a factor of holism and opening to change.

The Heisenberg Uncertainty Principle evolved during World War II to address the problem of evil.  It provides a theoretical framework for the issue of how an experiment is influenced by the consciousness of the scientist.  In the past it was assumed that all experiments would be performed by a patriarchal consciousness.  Well, the incorporation of minorities and women into the art world reflected how the consciousness of the Other would be reflected in art.

Around the turn of the millennium, I noticed various cutting edge dance pieces incorporating the Heisenberg Uncertainty Principle by placing a figure in street clothes on stage.  This figure represented the ego of the choreographer, a metaphor for the temporary condition of the artist self-consciously observing his process of creation.   This state of self-consciousness was an essential component of postmodernism that eventually became corrupting when postmodern art become synonomous with cynical, so much so that it alienated any potential audiences.  Yet, by creating works that acknowledged this aspect of the postmodern, the artist was absorbing this consciousness into their body of work and preparing for an unconscious leap into the fertile territory of the erotic.  It was as if human instinct, in finally recognizing its existential state of aloneness, finally leap into the dark to a unexpectedly joyful interconnectedness with the universe.  Out of the desperation for evolutionary movement, a new holism in art has been born.

The acknowledgement of the Heisenberg principle became an essential demarcation point on the cutting edge of performance.  Wiilliam Forstythe began in 1992 with the ticketape spelling out the fears of inertia.  His last performance had couples lying on stage, detached from the dancers but interconnected with one another.  This added the element of eros, where self-conscious of the one became the interconnection between the two.

In this sense, the unifying symbol is the ego consciousness.  The figure in street clothes represents the ordinary human being at a crucial cultural crossroads, as well as the artist who is limited by his own mind.  The challenge presented by these curators was this: how do we embrace our ordinariness in order to become extraordinary?  In acknowledging the limitations and effects of ego on creation, these cutting edge artists were also expressing a desire to move into new territory.  Postmodernism served to deconstruct the patriarchal archetypes and bring former outsiders into the culture, but in its latter stages the movement had become dependent on external referencing that there was nothing left to reference.  How do you make a xerox of a xerox?  The self-consciousness expressed on stage by cutting edge choreographers was actually a turning point for a new unified expression to emerge.

Into this state of cultural void at the change of millennium was a return to eroticism heralded by a superb Surrealist exhibition at the Met.  A new willingness to look at gender with the goal no longer being separatist identity movements but rather, a unification reflected in the globalization of art.

Polarities were emphasized during the last portion of the 20th century during the era of single interest politics and various social movements such as Black Power, Feminism and Gay Pride.

The unifying symbol of the World Trade Center has eradicated single interest politics and separatist movements.  This brings us to the question of what other symbols could guide us into a new holistic era.  We must now turn to the feminine, which gives birth to the new forms.  What new archetypes of the feminine are emerging?  Ironically, we need only look to the news to find the place where the sacred marriage was practiced in ancient Sumer, which is present day Iraq.

The hieros gamos, or sacred marriage, is one of the earliest recorded public ceremonies in written history.    The Sacred Marriage Rites took place in ancient Sumer and were deemed essential for the fertility of the land.  The myth of the Holy Grail had to do with the Fisher King whose impotence reflected drought.  This drought too happened under the postmodern movement at the close of the 20th century, the world weariness of its endless copying (making Xeroxes of Xeroxes)  reflecting the very fact of infertility in the culture.   The scandal of the Clinton White house with the symbol of the semen stained blue dress carried the myth into modern times revealing the sexual potency of the ruler restoring eroticism after feminists had drained it from the culture.

The ideal 21st century performance art would then be on that which constellates the hieros gamos, or alchemical conuictio, which explains why artists at the forefront of this movement have documented the incarnatio with photography that fixed the conuictio in form.  Therefore, we have the realization of symbols arising from the changeable conuinctio reflective of the natural process of life/death/rebirth arising from the fixed constellations.of the patriarchal archetypes.  Jung failed to grasp this reality because he was trapped within it.

Jung’s belief that the Neoplatonic quaternity would be the unchangeable art of which the incarnatio would be born.   In his penetrating analysis on this topic of the Return of the World Soul, Dr. Remo Roth explains the necessity of including the feminine in the Christian trinity.

My experience in working with the emergence of this archetype is the inevitability of the birth arising from the feminine.  The feminine gives birth to the Self before she can birth the new man.  Thus we have the origins of the Kundalini Awakening in the 21st century in the feminist art of the seventies, giving way to the feminist spirituality within the New Age movement of the eighties and the thrust to personal embodiment spreading like wildfire in the grassroots in the first decade of the 21st century.

The Christian trinity of the father, son and Holy Ghost leaves out the divine face of the feminine.  And yet, the Neoplatonic quaternity that Jung was clinging onto is also static, an unchangeable idea of wholeness which precludes the incarnatio of the conuinctio through the immersion of spirit (masculine) in matter (feminine). 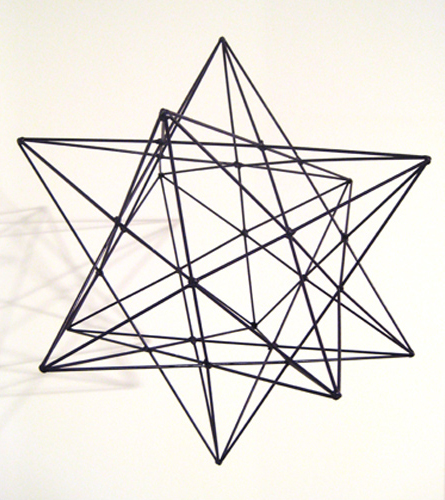 Thus, we return to the ascent of the symbol.  In the symbol of the hieros gamos we find the reigning absolute to which the ego remains subordinate.  The quest of the hieros gamos replaces moral relativism; the sacred marriage of masculine and feminine is the new god of the age to which all else remains subordinate.  This image fits into the Jungian belief that the Self circumscribed the ego, which couldn’t perceive the Self in the manner that a goldfish cannot perceive the water in the fish bowl.  Therefore, artist leap into unconscious territory – the gray borders between disciplines – allow for the free expression of Self.  How can the work contain the statement that the ego is not in control?  By creating a symbol for ego in the character sitting on stage in street clothes who remains detached while marking time during the performance taking place all around him.

These transitional works utilized the Heisenberg Uncertainty Principle to move the work of art beyond a state of manifestation of the creator’s ego.  In doing so, they addressed the moral relativism of postmodernism through representation.  The figures were present but not engaged in the action.  They were representations of Jung’s static quaternity while the action on stage was free to move into unknown territory of the incarnatio moving in a direction towards the conunctio, or hieros gamos.

Astrologers interpret the constellations of an emerging archetypes as the planets in motion against a backdrop of fixed stars.  Returning to the ancient constellations that create this constant backdrop, even as the constellations of the signs change with the Precession of the Equinoxes.  We find the myth of Ariadne in the Northern Crown, with seven stars representing the seven chakras of the body, or seven stages of the journey of Venus on her underworld descent.  These ancient mythologies continue to enlighten the artist’s journey underground to death and rebirth.  Marina Abramovic provided a new image of the sacred feminine for the collective when Venus went retrograde in this constellation in November 2002 and she responded with her award winning performance The House with the Ocean View.

Dr. Remo F. Roth:   “A further concept I have developed in the so-called synchronistic life.  Almost everything in my creative life happens synchronistically because I have learned to develop in some sort of altered state which I call Eros Consciousness like this real miracles can happen and my creative work is accelerated and deepened mostly in a totally unforseeable way.”

This brings us to a new expression that celebrates life, not only doing away with the nihilism that reigned at the end of the twemtieth century but places it in its proper perspective – the new version of the ancient Myth of Eternal Return.  The dying god/goddess reborn into a new age of humanity also delivers the characteristics of that age.

And clearly, in our times we expect artists to deliver the Aquarian archetypes via their interpretations of this myth that holds all of humanity in its thrall.